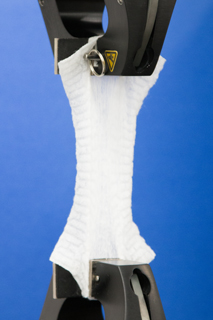 This test method provides the values in both inch-pound units and SI units. Inch-pound units is the technically correct name for the customary  units used in the United States.  SI units is the technically correct name for the system of metric units known as the International System of Units.  The values state in either acceptable metric units or in other units shall be regarded separately as standard.  The values stated in each system may not be exact equivalents; therefore, each system must be used independently of the other, without combining in any way.

A 100-mm (4.0-in) wide specimen is mounted centrally in clamps of a tensile testing machine and a force applied until the specimen breaks.  Values for the breaking force and the elongation of the test specimen are obtained from machine scales, dials, autographic recording charts, or a computer interfaced with the testing machine.  The test method describes procedures for carrying out fabric grab tensile tests using two types of specimens and three alternative types of testing machines.

In case of disagreement arising from differences in reported test values when using this test method for acceptance testing of commercial shipments, the purchaser and the supplier should conduct comparative tests to determine if there is a statistical bias between their laboratories. Competent statistical assistance is recommended for the investigation of bias. As a minimum, the two parties should take a group of test specimens which are as homogeneous as possible and which are from a lot of material of the type in question. The test specimens should then be randomly assigned in equal numbers to each laboratory for testing. The average results from the two laboratories should be compared using Student’s t-test for unpaired data and an acceptable probability level chosen by the two parties before testing is begun. If a bias is found, either its cause must be found and corrected, or the purchaser and the supplier must agree to interpret future test results in light of the known bias.

This test method is not recommended for knitted fabrics because of their high stretch.